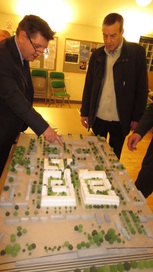 There was a good turnout at the latest South Oxhey Initiative public consultation day held on 27th March.

Your local Labour councillors were also on hand to hear residents’ views directly.  One member of the Labour team was there virtually all day 10am - 8pm!

Representatives from architects Levitt Bernstein, appointed this year, who have a good track record in helping to deliver successful projects elsewhere, displayed examples of other mixed shopping and residential areas they’ve been involved in.

The council has defined the core area it expects bids to redevelop and which is shown as ‘current scheme’ in a document that you can download here.  It is a considerably scale back site in terms of its size.

Your Labour team are continuing to press for 45% of the housing planned to be affordable homes, so that local people can continue to live here.  The Conservatives want to see a scheme that provides far fewer affordable homes than we need.

In fact, the Conservatives had withdrawn the support for the project last year - that’s how much they think of South Oxhey - but with an election in the offing have swiftly changed their minds.

Councillor Stephen Cox branded them the “Hokey Cokey party” saying; “One minute they’re in, the next they’re out.  In two shakes they’ll turn around again.

“South Oxhey deserves better than the Conservatives’ vacillation and indecisiveness.  Labour says what it’s all about is doing the best for South Oxhey.  We’ve always been clear and consistent about that.”

Plans for a brand new wwimming pool at The Centre in Gosforth Lane were also on display.

There is still an opportunity to express your views even if you couldn’t make the consultation event at the Parish Hall in Oxhey Drive by downloading a questionnaire, filling it in and sending it to Three Rivers.  To fill in the questionnaire: