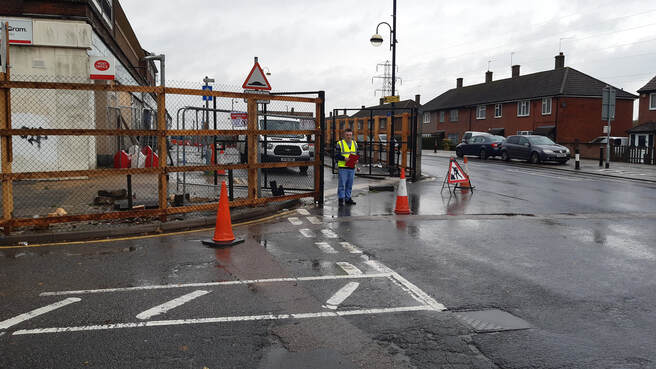 Councillor Cox was on site to see the work being carried out
SIGHTLINES have been restored after hoardings were removed at the junction of Prestwick Road and Oxhey Drive thanks to action from a leading South Oxhey councillor.
​
Councillor Stephen Cox waged a 10-day  battle with homebuilders to get visibility improved at the mini-roundabout, which he said had been turned into “a wholly sub-standard danger junction

At an on-site meeting with Ian Jarvis, Countryside’s senior construction manager, and fellow Labour Councillor Joan King, he hammered out plans to rectify the situation.

Thanks to the persistence of Councillor Cox,  see-through chain-link fencing was installed around the demolition site last month and  improvement for drivers was instant.

Councillor Cox slammed the poor visibility issues the hoardings had created, saying that drivers travelling southbound on Prestwick Road couldn’t see traffic from the right exiting Oxhey Drive and vice versa.
​
He continued, saying that difficulties had also been created for large vehicles turning left towards Watford as they had to swing    into the opposite side of the road facing on-coming traffic.

“I feared there would be a bad accident with the hoardings in place,” he said.
​
Countryside Homes have also acted on your local Labour team’s concerns about visibility at the junction of Bridlington Road and Oxhey Drive when demolition starts there.  “We’re now confident that sightlines will be maintained,” said Councillor Stephen Cox.