Planned Post Office move is off after intervention by Labour team 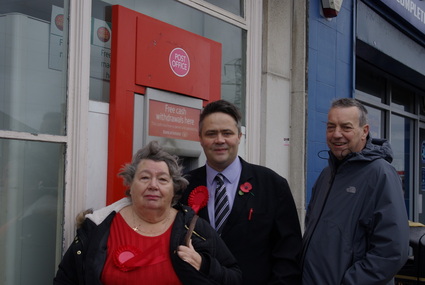 Cllrs Joan King, William Waite and Len Tippen
Next month’s planned move of South Oxhey’s Post Office into McColls has been called off.

In October a public consultation was announced regarding the planned relocation of the Post Office which is situated at 39 The Parade, Prestwick Road at the junction with Oxhey Drive into the newsagents a short distance away.

The shock announcement that the move was not happening came in a letter dated 8 December to your Labour Team from Will Russell, the Post Office’s Regional Network Manager.

In it he says; “Unfortunately the proposed new premises is no longer available for our Post Office use  and we are therefore unable to progress with the move of Prestwick Road Post Office at this time.”   The branch will continue to operate from its existing location and any future move will be subject to a further period of local public consultation.”

Your Labour team had responded to the public consultation in a lengthy email advising them of various issues around the South Oxhey Initiative which could impact a move.  “We expressed fears that the estate’s main shopping area could be left without a Post Office during the redevelopment were McColls to pull out and told the Post Office that it was “imperative” that residents enjoyed uninterrupted service at all times,” said Councillor Stephen Cox.

The Post Office have said that the present branch “will continue to operate from its existing location and any future move will be subject to a further period of local public consultation.”

As always your local Labour team will keep you posted.