Why registering to vote matters

Not being on the electoral roll means you can’t vote, but there are other disadvantages too.  Credit agencies check it as part of their procedures when people apply for a loan.
​
South Oxhey lagging behind Croxley Green...
South Oxhey ward had the lowest number of responding households across the whole of Three Rivers at 87.35% with 5,041 voters registering.  However, the response rate was over 10% below the area which had the highest response rate.  Durrants ward (in Croxley Green) came out on top with a staggering 97.76% of households returning their form, or registering on line.

That good performance ensured that 5,056 voters registered there, just 15 more than South Oxhey. 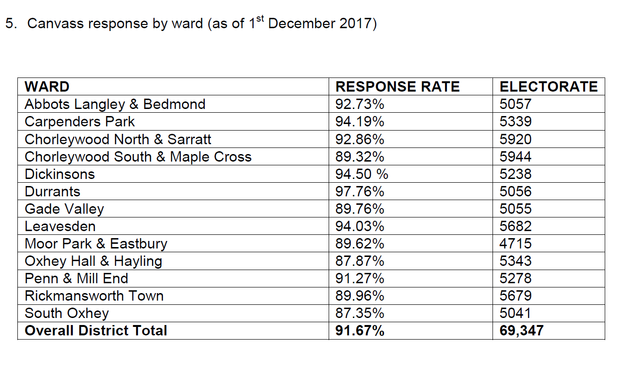 ​...even though we have more households
These figures matter a great deal, both in terms of people’s ability to cast a vote, but also because when the Boundary Commission periodically come to work out the size of each ward to try and make everyone’s vote equal, they try to get the same number of electors in each ward.

It is clear that whereas almost all residents in the Durrants wards are registered to vote, that is far from the case in South Oxhey, where an extra 10% of households responding would have demonstrated that South Oxhey actually has more voters contained within it than Durrants Ward.

No vote = no voice
But when the Boundary Commission come to look at it they will say there are more voters in Durrants Ward than there are in South Oxhey Ward.  This sort of situation leads to South Oxhey potentially being under represented and without doubt makes the job of your local councillors more difficult.

This is why the local Labour team, having been appraised of the information shown in the table, raised this unsatisfactory state of affairs at the council meeting earlier this year.

The council has agreed to look at other ways to boost electoral registration in South Oxhey Ward and other areas where the response rate is low.  Councillor Stephen Cox will be exploring ways to achieving that with councillors from other parties and Three Rivers Council’s election staff in July.

“I am glad Three Rivers Council is taking this matter seriously and is already taking steps to try and correct the imbalance,” said Councillor Stephen Cox.