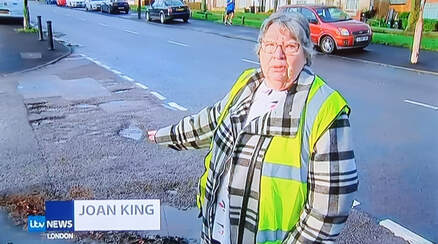 Dangerous potholes across South Oxhey were targeted in a Sunday lunchtime blitz in January.

Your Labour councillors were out and about for over two hours and during that time visited every street covering 17 miles.

Well over 50 potholes were found and reported later that day.

“We take great pride in our area,” said Councillor Joan King.  “It was a worthwhile exercise.  Not surprisingly the roads around the main building site at The Precinct were the worst, with Redwood Close having the largest number, but these were not as dangerous,” said Joan.

Councillor Stephen King saw a road engineer out the very next day actioning the reports they had received from the Labour team.  “He told me he’d been out since 6am,” said Councillor Stephen King, who was out walking his dog and stopped to speak to the engineer.
​
The intrepid trios' efforts did not go unnoticed.  As well as their pothole patrol being reported in the Watford Observer, ITV also picked up the story and Councillor Joan King featured on the television news which showcased the hard work of the local Labour team.